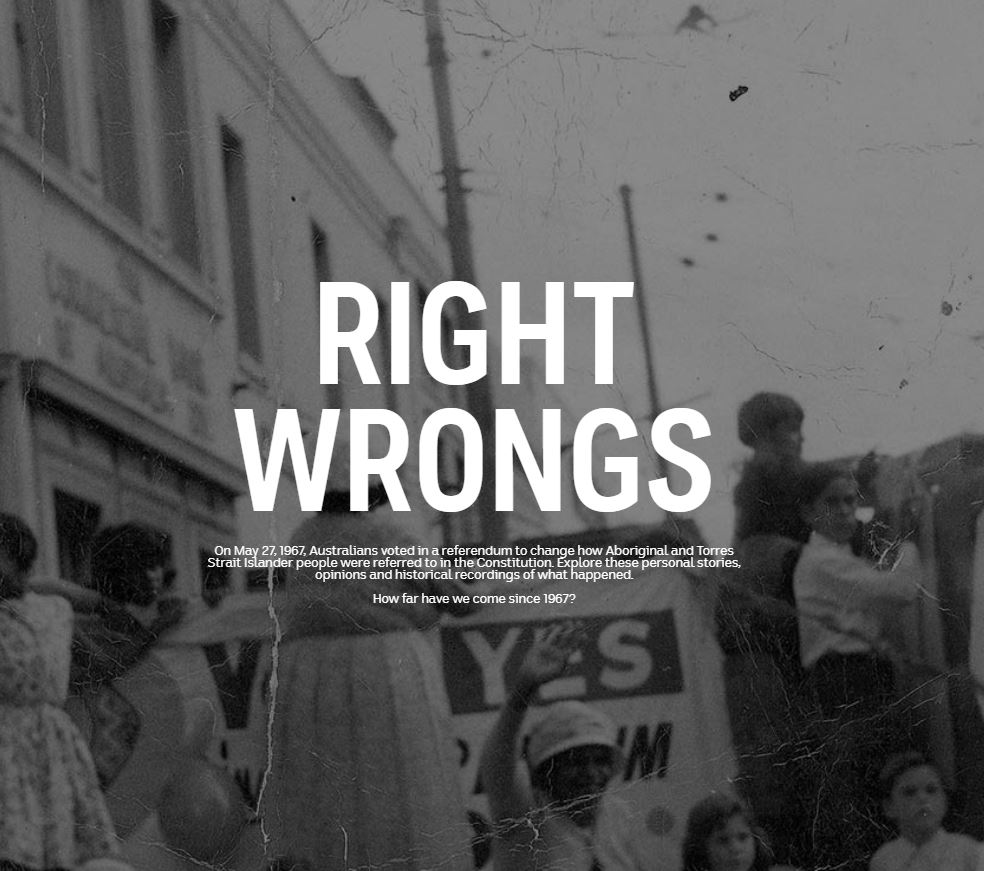 As your school or early learning service launches into its National Reconciliation Week celebrations on May 27th this year, consider engaging with the ABC Right Wrongs platform. Right Wrongs will help you to reflect on the significance of the 1967 referendum and how historical acceptance and ‘righting wrongs’ continue to drive reconciliation forward. Historical acceptance is one of the five integral and interrelated dimensions of reconciliation in Australia. True historical acceptance requires all Australians to understand and accept the wrongs of the past and acknowledge both the immediate and intergenerational impacts of these wrongs. It is only through honestly and holistically acknowledging the past that Australia can properly make amends for past wrongs and ensure that they are never repeated into the future.

This year’s 2018 National Reconciliation Week theme, Don’t Keep History a Mystery, calls on all Australians to celebrate the tens of thousands of years of Aboriginal and Torres Strait Islander histories prior to British arrival, as well as the important milestones that have since been made in our nation’s reconciliation journey such as those in the 2018 NRW poster.

One such milestone is the 1967 referendum. Held on May 27, 1967, the referendum represented a momentous turning point in Australian history during which more than 90 per cent of voters chose ‘Yes’ to count Aboriginal and Torres Strait Islander peoples in the census and give the Government the power to make laws for Aboriginal and Torres Strait Islander peoples.

Launched last year to commemorate the fiftieth anniversary of the 1967 referendum, the ABC Right Wrongs platform shares primary and archival resources to provide a holistic view of life before, during and after May 27, 1967. The platform was put together to provide appropriate public access to personal stories, opinions and historical recordings of what happened in the lead up to the 1967 referendum, all the while asking viewers to critically reflect on how far our nation has come on its reconciliation journey since 1967.

Content on the platform is structured around five core chapters:

Chapter 1: Controlled but not counted What was life like for Aboriginal and Torres Strait Islander Communities before the vote?

Chapter 2: Fighting for change Across Australia, Aboriginal and Torres Strait Islander people were finding their voices standing up for their basic human rights.

Chapter 4: The Legacy Fifty years on, what has changed and what has stayed the same?

Chapter 5: Where to now?

As this site is based on historical and archival footage, some content may be sensitive for viewers. You should look at the platform (and discuss with local Aboriginal and Torres Strait Islander community) prior to using it in your classroom or early learning service setting.

For further resources regarding the relationship between historical acceptance and reconciliation, you may wish to consult the History resource guide on the Narragunnawali platform, and consider how Aboriginal and Torres Strait Islander histories and cultures can be meaningfully embedded in cross-curricula resourcing and everyday programming.