Reconciliation in the Media – Celebrating Achievements

Speaking and Listening from the Heart 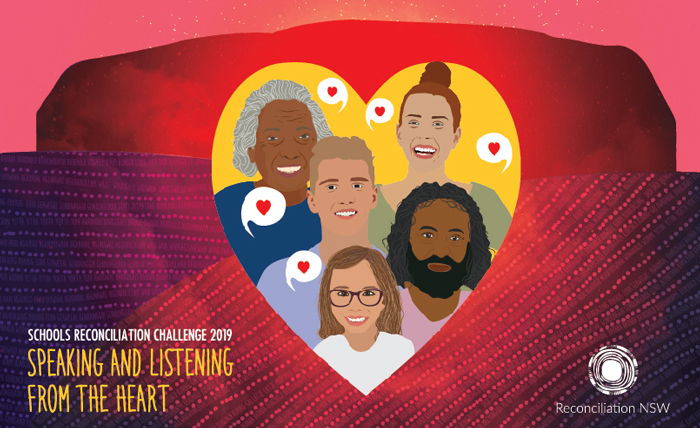 Celebrating 10 years of acknowledging positive and meaningful artistic contributions from over 1,500 students towards a reconciled Australia, the Schools Reconciliation Challenge is an annual writing and art competition for young people across NSW and the ACT.

Leading the initiative, Reconciliation NSW posed this challenge to students from grades 5-9, promoting the creation of pieces inspired and influenced by the voices, stories, cultures and histories of Aboriginal and Torres Strait Islander peoples. This year’s challenge provided thought-provoking art and writing works including paintings, mixed media works, metal work, stories and addressing the theme of ‘Speaking and Listening from the Heart’.

This theme was chosen as ‘speaking and listening from the heart is about connecting and sharing what is important to us as individuals, families, communities and as a country’; students were encouraged to draw inspiration from such influences as the Uluru Statement from the Heart, and signature events such as National Reconciliation Week and NAIDOC.

Blaze Kwaymullina, a Palyku Traditional Owner from the inland Pilbara region of Western Australia, recognised the importance of celebrating culture as reflected in this year’s theme, “A story spoken from the heart can pierce you, become a part of you and change the way you see yourself and the world. Listening to a heart story is a way of showing respect, a silent acknowledgement of what the speaker has lived through and where they have come from.”

In 2020, the exhibition will embark on a regional tour of NSW; for more information on travel dates and destinations, please visit the Schools Reconciliation Challenge website here.

The prestigious UN Day Honour was created to recognise individuals or organisations in Australia that have made a significant contribution to the aims and objectives of the UN. Reconciliation Australia received this award in recognition of its ‘embodiment of UN humanitarian values with regards to the rights of Aboriginal and Torres Strait Islander peoples and our demonstrated accomplishments of promoting the principle of equal rights and self-determination of peoples’.

Reconciliation Australia will continue to set the benchmark for all organisations in promoting and facilitating respect, trust and positive relationships between Aboriginal and Torres Strait Islander peoples and the wider Australian community to achieve a reconciled Australia. 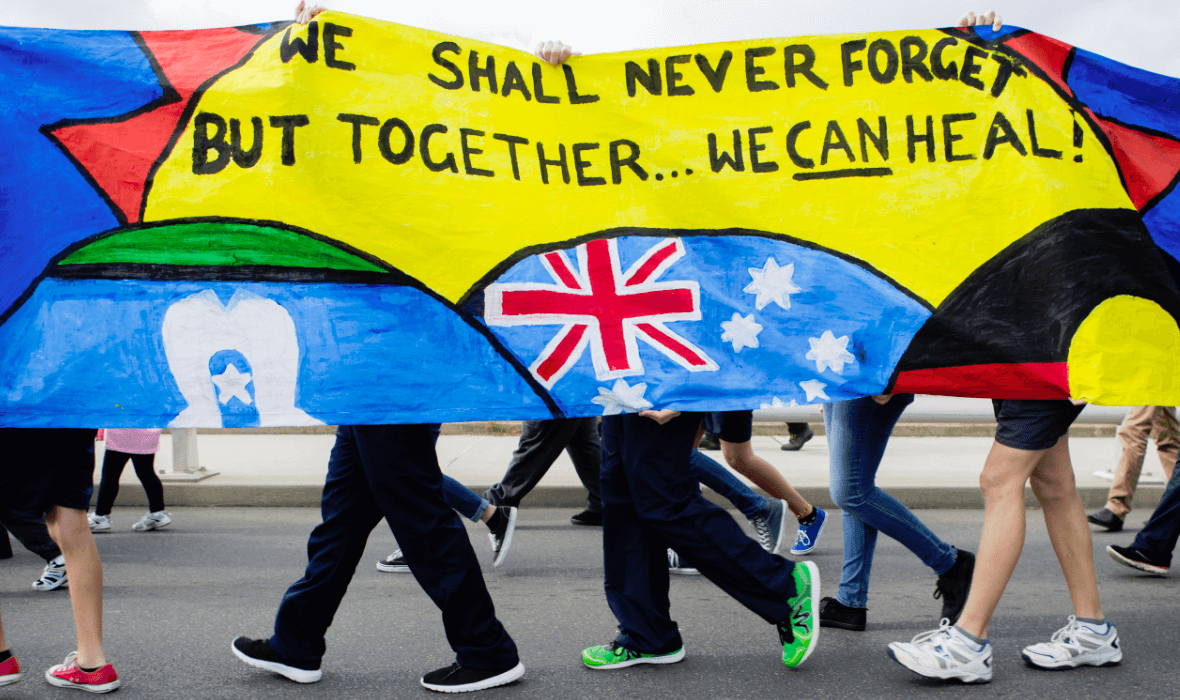 Over six hours on Sunday 28th May, 2000, an estimated 250,000 people walked across the Sydney Harbour Bridge in the “Walk for Reconciliation”; an unprecedented gathering of people in support of a more reconciled Australia.

That landmark bridge walk was the second of two events comprising “Corroboree 2000”, painstakingly planned by the Council for Aboriginal Reconciliation (CAR). The first event was a ceremonial gathering of Indigenous and non-Indigenous leaders including State premiers, the Governor-General Sir William Deane and Prime Minister John Howard. Here, two documents were presented by the Council; the Australian Declaration Towards Reconciliation and the Roadmap for Reconciliation, both created to guide Australians towards achieving a more reconciled nation.

Reconciliation Australia was established following Corroboree 2000 to foster these aims, and as the 20th anniversary of that ground-breaking year, 2020 promises to offer further opportunities for Australians to celebrate existing contributions towards reconciliation, and reflect on the challenges ahead.

Since its inception, Reconciliation Australia has worked to foster respect and understanding for Aboriginal and Torres Strait Islander peoples, cultures and histories through initiatives such as the Reconciliation Action Plan (RAP) program and Narragunnawali: Reconciliation in Education.

Some achievements to date include:

2020 will see a number of events and initiatives acknowledging significant contributions made by leaders, community members and volunteers for and since Corroboree 2000, as well as positive steps made in the last twenty years. More information on how you can get involved in 2020 keep an eye out on Narragunnawali News and Facebook Community group; the Reconciliation News magazine; the Reconciliation Australia Facebook page and website.

Since 1992, Australians have watched students from around the country, using dance to tell a story through Wakakirri, Australia’s largest performing arts event for schools. In August of this year over 1 million people tuned in to watch performances given at various theatres around Australia, before public audiences as well as a judging panel made up of the country’s leading entertainment professionals.

Reconciliation Australia is a proud sponsor of the ‘Reconciliation Story Award’ for Wakakirri for both the primary and secondary school categories. This award acknowledges performances serving to increase respect, reduce prejudice and strengthen relationships between Aboriginal and Torres Strait Islander peoples and the wider community.

Coniston Public School (NSW) won the primary school category with their performance entitled “My Story Through Our Eyes” based on a novel on the Stolen Generations. The secondary school award was bestowed upon Vincentia High School (NSW) for “403”, portraying the 1987 return of 403 hectares of traditional land to the Wreck Bay Aboriginal Community.

Wakakirri, meaning to ‘dance a story’ in the language of the Wangaaypuwan people of western NSW, emphasises creative movement and drama. It’s regarded as an affordable means for students and schools across the country to express their innovation, imagination and diversity through the alternative means of dance.

Wakakirri invites students to participate in Australia’s largest Performing Arts event for schools in 2020. The National Reconciliation Story Award category is open to schools who tell a story that aims to promote reconciliation in their local community, and demonstrates pride in, and respect for Aboriginal and Torres Strait Islander histories, cultures and contributions.

Each year hundreds of schools across the nation create Story-Dances for Wakakirri that reflect student’s thoughts, ideas and aspirations. Wakakirri is committed to education, inclusivity and sustainability through performance. Wakakirri recognises excellence with awards that include health, cultural and environmental themes. Wakakirri is open to every school in Australia with separate events for primary, secondary & remote schools. 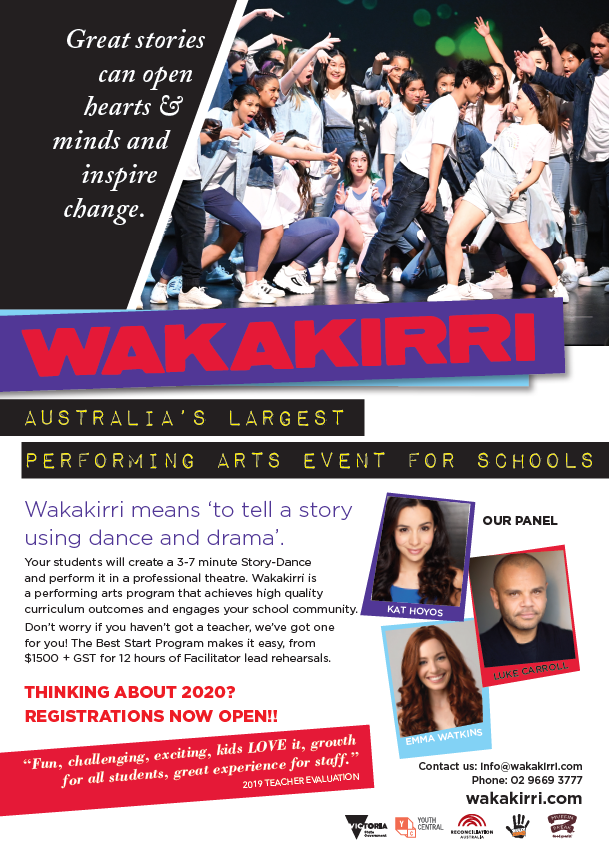