Teaching, learning and accepting Australia’s true histories since colonisation can be challenging, but plays a key part in promoting reconciliation in the classroom and within the wider community.

An exemplar of how historical truth-telling can be achieved in the educational community context has been demonstrated by Tuggerah Lakes Secondary College, Tumbi Umbi Campus’ performance for Wakakirri – Australia’s largest performing arts event for primary and secondary schools in Australia. Each year Reconciliation Australia proudly supports the Reconciliation Story Award. This year’s Wakakirri Performance saw 240 schools hit the stage at 40 events in professional theatres across the country, with Tumbi Umbi deservedly winning the Reconciliation Story Award and the Story of the Year in the secondary school category.

Tumbi Umbi took out the top Award for their dramatic performance of ‘The Rabbits’, an abstract interpretation of the colonisation of Australia, based on the picture book of the same name by legendary Australian author John Marsden and illustrator Shaun Tan.

Tumbi Umbi’s story explored the harsh truths of Australia’s colonial past and looked at understanding and addressing the continuing and intergenerational inequalities and inequities  experienced to this day. With messages of hope and reconciliation, Wakakirri’s National Panel said Tumbi Umbi’s story was a “fantastic performance” with “strong and relevant” themes.

"This is an awesome performance – loved every aspect of it; the lighting, animated elements, costumes, music, and especially the choreography and dancing. At first I was wondering how they could pull off this narrative in seven minutes, but I think it’s done pretty brilliantly by going straight to the core concepts with skillful restraint, and broad enough to have an epic mythological feel about it. Those rabbits are truly terrifying too! The feeling of bizarre invasion really hits you. And the subtle references to detention were a thought-provoking and elegant metaphor. I’m super impressed that the students themselves did all of this! Amazing."

This is Tumbi Umbi’s fifth year participating in Wakakirri and the first time the school has won Story of the Year – a huge achievement for this small (Year 7-10) school from the NSW Central Coast. Tessa Keenan from the Narragunnawali team and Wakakirri Festival Director Adam Loxley attended a special assembly at Tumbi Umbi on 3 December, to celebrate the achievements of the 70+ students who worked on this year’s Story Dance production. 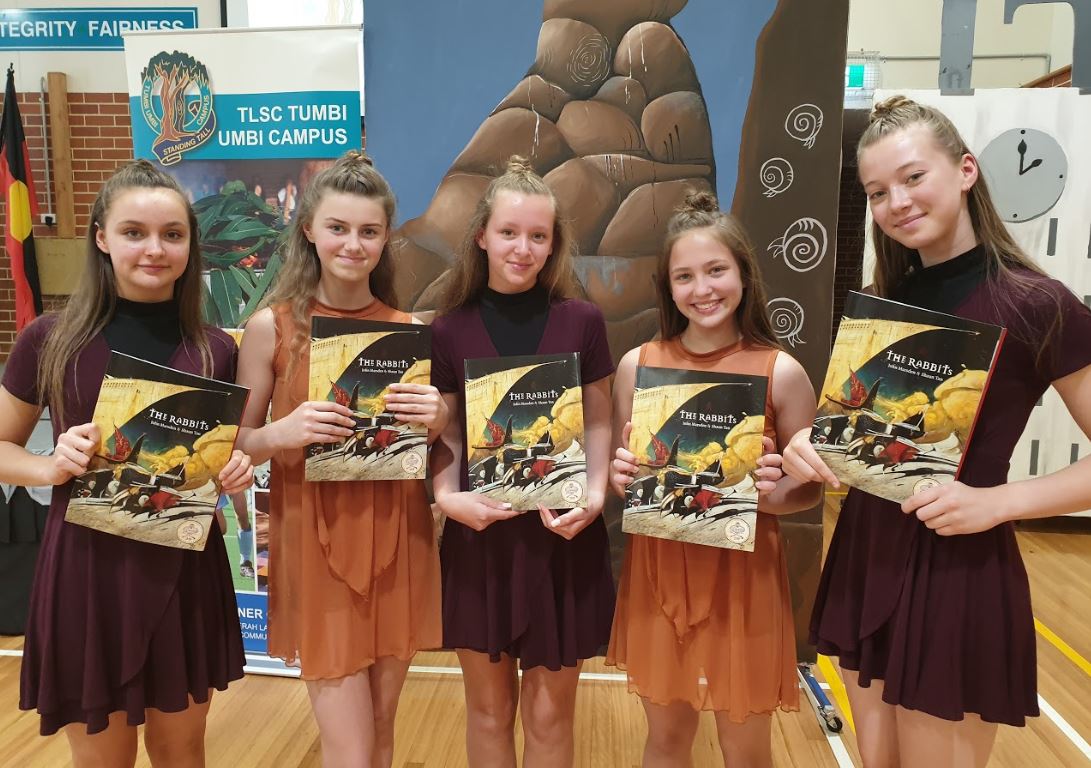 Students with individual copies of The Rabbits, donated to each of the performers by publishers Hachette Australia

Big stories about big issues have been at the forefront of Wakakirri this year. Popular themes explored by students have included reconciliation, environmental conservation and mental health.

Wakakirri provides a platform for thousands of students to tell stories that explore their thoughts, ideas and aspirations through dance and drama. For more ideas on how your school or early learning service can consider celebrating reconciliation stories through local and national awards programs, see the Wakakirri or Reconciliation Awards RAP Action page on the Narragunnawali platform, and consider nominating for a future Wakakirri or Narragunnawali Award.